NOTES AND INSTRUCTIONS ON USING THE STORM WATER NETWORK
PIPE SIZING CALCULATOR
Formulas: (as per Code)


Pipe Size from the Colebrook-White formula.


Method:
The method follows the suggestions given in the Australian Plumbing Code AS.NZS 3500.3 .2018 with the following exceptions:-

Different rainfall intensities, and coefficients of runoff are allowed in different catchment areas, depending on the location of the catchment area, and the likely damage. Pipe flows are calculated using the above runoff formula,

A theoretical Pipe Internal Diameter (ID) is calculated using the Colebrook-White formula shown above.
If a pipe is not available at this exact diameter, (usually the case) the nearest higher available diameter is chosen. This means that a pipe rarely flows full.

An advantage of this method is that (under the code) it is not necessary to calculate energy losses through junctions, field inlets, access chambers etc. To ensure that these losses are not excessive the code also limits the allowable velocity (flowing full at the design flow) for pipes coming out of pits to 1.5m/s and to 2m/s else where.

As an aside, Municipal systems are not designed this way. they are designed to run full pipes as much as possible. This means that the water level must build up in access chambers etc to provide enough head to force the downstream pipe to flow full. So all energy losses must be calculated. The whole system is designed on the water levels, known as the Hydraulic Grade Line (HGL). The idea is to keep the water level below the surface level (usually 300mm) at potential overflow points. This is a huge trial and error process, as the energy loss depends on the velocity, which depends on the pipe size, which is what we are trying to find out!. Learn more

So for our purposes on Building Sites, it doesn't matter much, as the Code method, or this program's method is quite acceptable. It may, or may not, result in a larger pipe in the system somewhere. But to be on the safe side it is always advisable to have an overland flow path to somewhere safe. (not into the basement please).
If this is not possible, and surcharge somewhere is likely to cause significant damage, it may be advisable to increase the storm frequency (ARI) for all catchments draining to this point.

Rainfall Intensity:
Rainfall intensities are determined from statistical data.
They relate to a storm that occurs at a certain frequency and lasts for a certain time. For design purposes, The local Authorities, and the powers that be, dictate what they consider to be an acceptable risk of flooding. It's not economical to design all storm water pipes for a storm that is only likely to occur once in every 100 years.
So each area of risk is allotted a design storm frequency called the Average Recurrence Interval (ARI).
A storm having an ARI of 20 years could be written as a 1 in 20 year storm, or 1:20, or Q20.
A Q100 storm is a lot more intense than a Q2 storm.

However, ARI tended to confuse the media and the lawyers, as everyone seemed to believe that a 1 in 100 year storm occurred exactly every 100 years.
So Engineers in their wisdom changed it to AEP (Annual Exceedance Probability).
A 1:100 year storm is 1% AEP, a 1 in 20 year storm is 5 in 100, ie 5% AEP. So, with a 10% AEP storm, there is a 10% chance of that storm occurring every year.

Catchment areas draining to Box gutters are considered the worst case, and require the maximum rainfall intensity. Q100. Surface areas all sloping away from the buildings are considered to be not much risk of damage, and a smaller intensity is allowed in the design. Q2

Allowable intensities as per Plumbing Code:-

The intensities for all these storm frequencies for Major Towns in Australia and New Zealand are shown in the calculator.
Intensities for other places can be found from "Intensity, Frequency, Duration" (IFD) Curves here:- Note in Australia we require a duration of 5mins. (New Zealand 10 mins)
Australia.
New Zealand

Some notes on AEP :
You may see this terminology starting to creep in on BOM sites and other texts.
AEP means Average Exceedance Probability.
ARI (average recurrence Interval) was too confusing for Lawyers, the media, and the general public.
It seems that everyone thought a 1 in 100 year storm would occur exactly once every 100 years. On the dot!

But in reality it is just a design terminology to take a guess at the storm intensity that on average may occur at that frequency.

Other Places:
For other places in the world, the required design storm Intensity can be found from the Local Bureau of Meteorology, Plumbing Code, or Municipal authority.
If using the International Plumbing Code, or the Uniform Plumbing Code as in the USA, the required intensity is for a Q100 storm of one hour duration for all catchments.
Note, this is less than a Q1, 5min, storm as required in Australia. A storm can bucket down for 5 mins, but cannot keep up that Intensity for 1 hour. The longer a storm lasts the lower the average intensity.

Coefficient of Runoff:
This is the "C" in the formula above. It is the percentage of rain that actually runs off.
So, a "C" of 0.6 means that only 60% on the rain falling on that catchment will run off. The rest soaks in, or is held in ponding etc. (eg if it falls into the swimming pool.)
"C" varies for the type of surface, soil type, grade etc.

Impervious surfaces as in roofs have total runoff so "C" = 1
For Pervious surfaces eg grassed areas, "C" can vary from 0.3 to 0.8
0.8 is the default used in the program. However the user can change this if required. 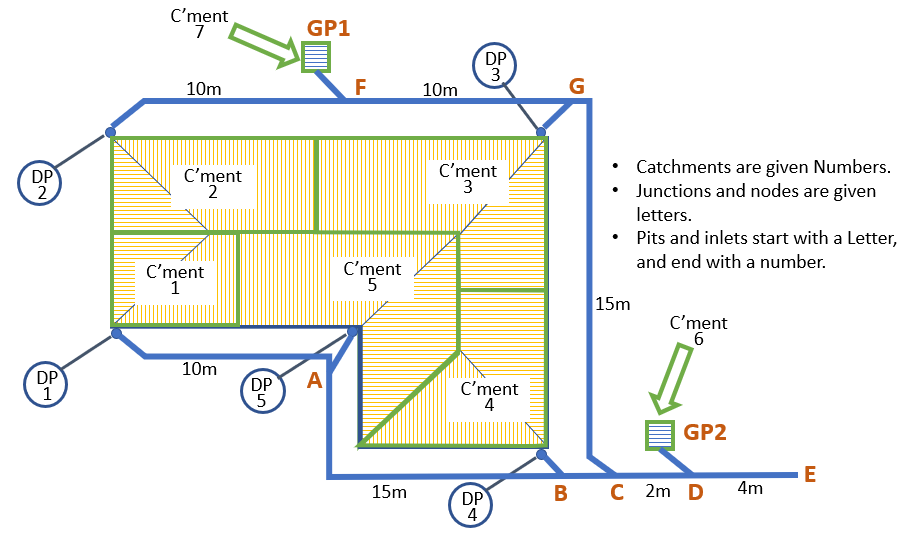 The numbers are Catchment Areas. If draining to a DP, the DP is given the same number. If draining to some other entry structure like a gully pit, the pit is give a separate name, like GP1 etc.

The Letters are for each pipe section where the flow or grade changes. Usually at junctions in the pipeline, and the final outlet.
(Letters will always be entered in Upper Case to avoid confusion between the cases.)

The pipe sections can be entered in any order within limits, as long as none are left out, or duplicated, or go around in circles etc.
However it is best to start at an upstream end, stop at each junction, and enter the branch line starting at its upstream end. This way the program can calculate in the order of the flow.

All catchment areas that are entered into the catchment table must find their way into the pipe system.


Note: It is the users responsibility to ensure that data is entered correctly, and that the program is suitable for the intended use.